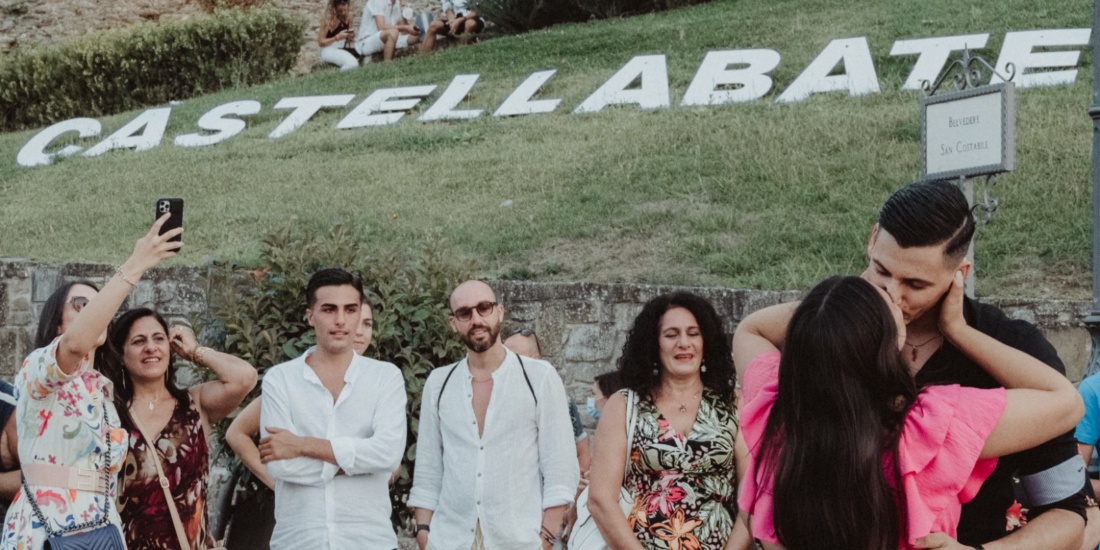 The marriage proposal is a tradition that has come back in vogue after having been wrongly neglected for decades. These are in fact moments that give a unique beauty, with an emotional charge that can equate the wedding itself. I am talking about it because in the last few weeks I have had the pleasure to be the videomaker for the marriage proposal of Fabio and Beatrice.

VIDEOMAKER FOR MARRIAGE PROPOSAL: THE STORY OF FABIO AND BEATRICE

Fabio and Beatrice are two young Italians who have been living in Germany for quite a while. Unexpectedly, he was the one to organize everything, with the aid of her family. The location chosen for the love declaration was the lovely Santa Maria di Castellabate.

The surprise effect was incredible, also because Beatrice thought that Fabio was in Germany.

I WAS AN ACCOMPLICE AS WELL!

I was hired as a filmmaker for the marriage proposal after having talked at length with Fabio, who has contacted me after several google searches.

It was a job that, of course, required the utmost discretion. I went to Santa Maria di Castellabate with two teams of operators and a drone, in order to catch all the emotions of the day.

An operator followed, hidden, Beatrice while walking through the streets of Santa Maria di Castellabate, while she was in a bar of the Cilentan town and chatting with her family. She could not imagine the enchanting moment she was about to experience.

At the same time Fabio too was being filmed. The boy was on the one hand busy with the preparations, on the other careful not to ruin the surprise. In the end everything went magnificently well! 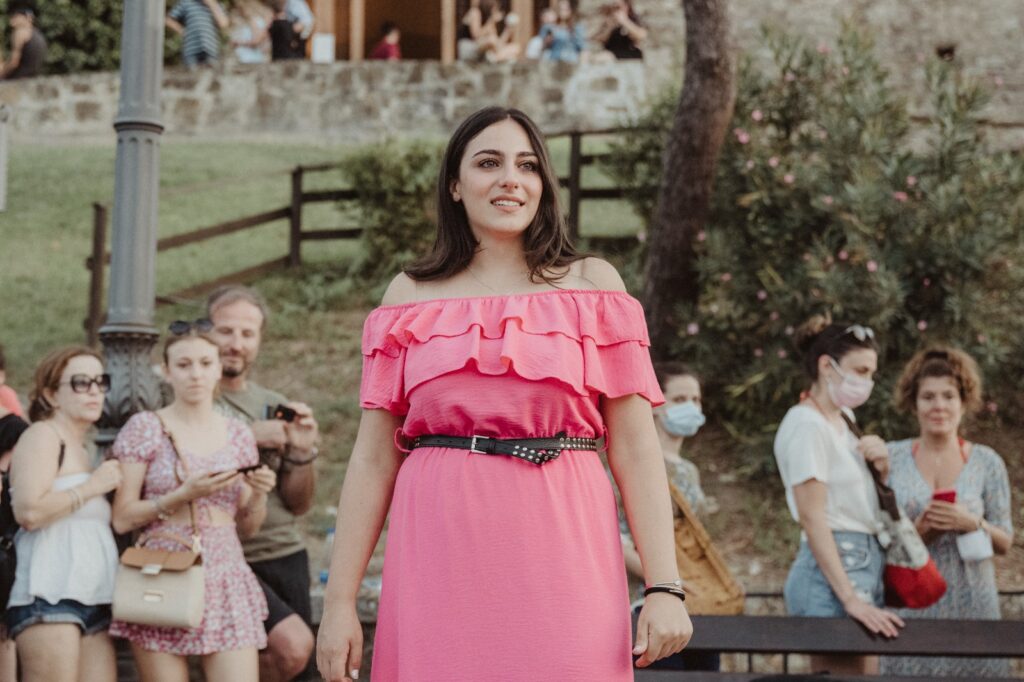 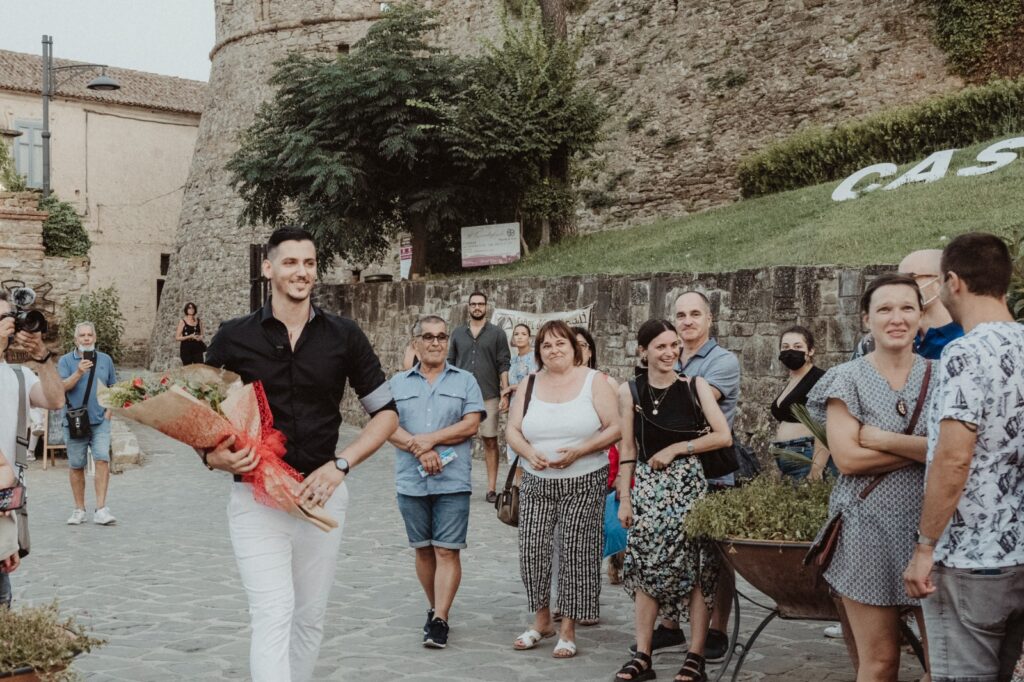 VIDEOMAKER FOR ELOPEMENTS: WHAT HAPPENED IN SANTA MARIA

We are in the famous panoramic scenery of Santa Maria di Castellabate. Beatrice had the first surprise when she noticed a projector displaying familiar pictures. Fabio and her in Milan, Fabio and her in Paris, Fabio and her in London and so on, a tour of the cities that they had visited together. “What is going on?” 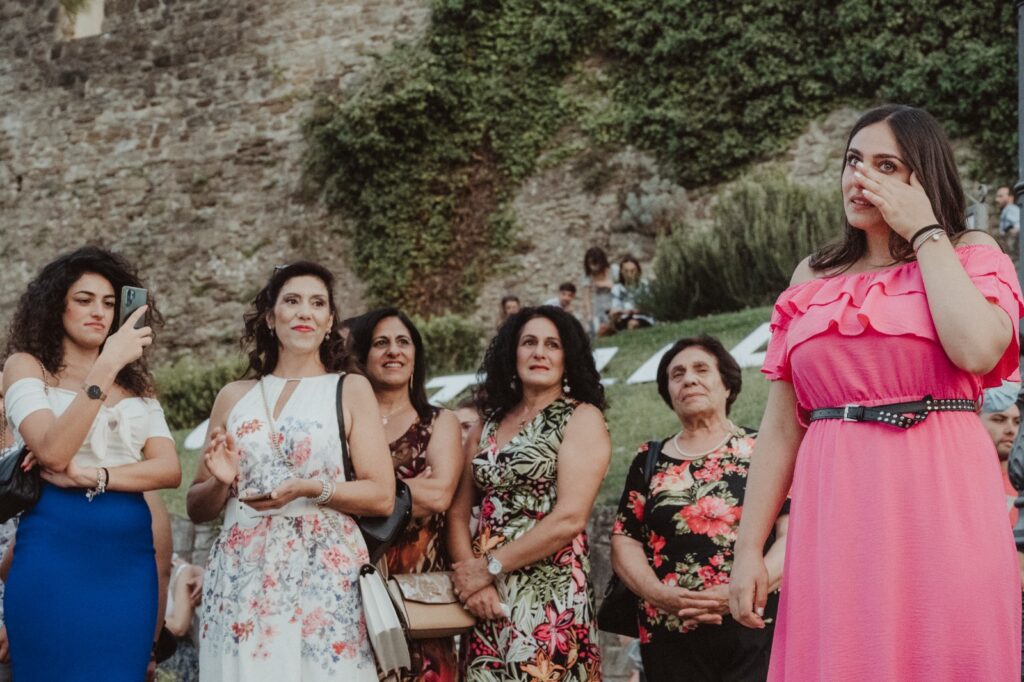 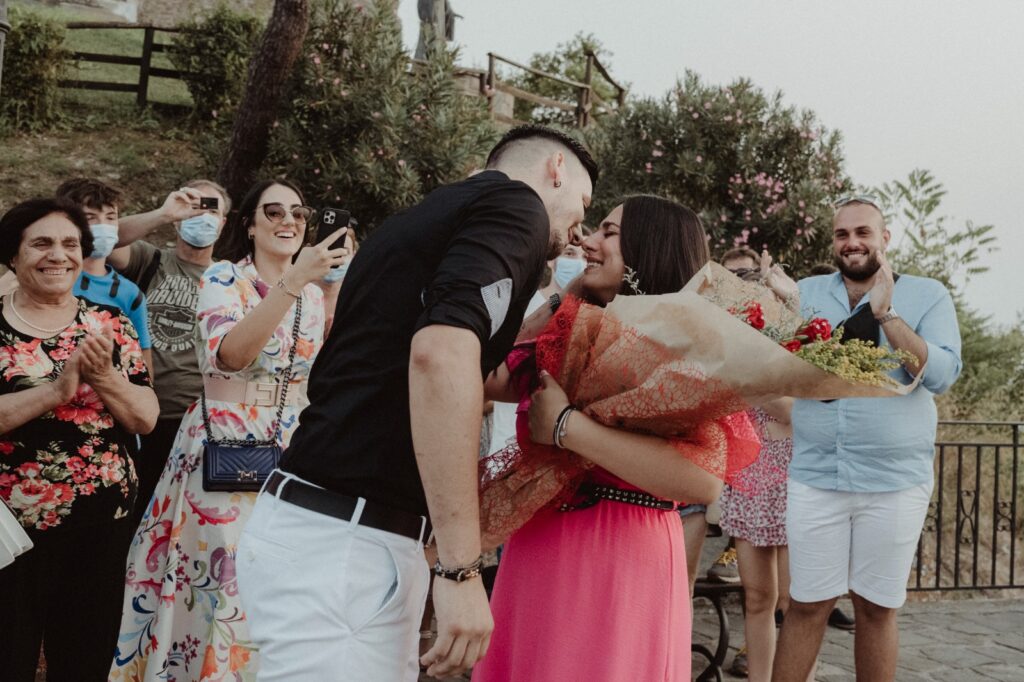 The emotion built up when two famous Salernitan musicians show up, Claudio and Diana, ambassadors of the Neapolitan Posteggia (He is a guitarist, percussionist and vocalist, while she is a singer and a piano player) who sang the song that was the soundtrack of their love story. 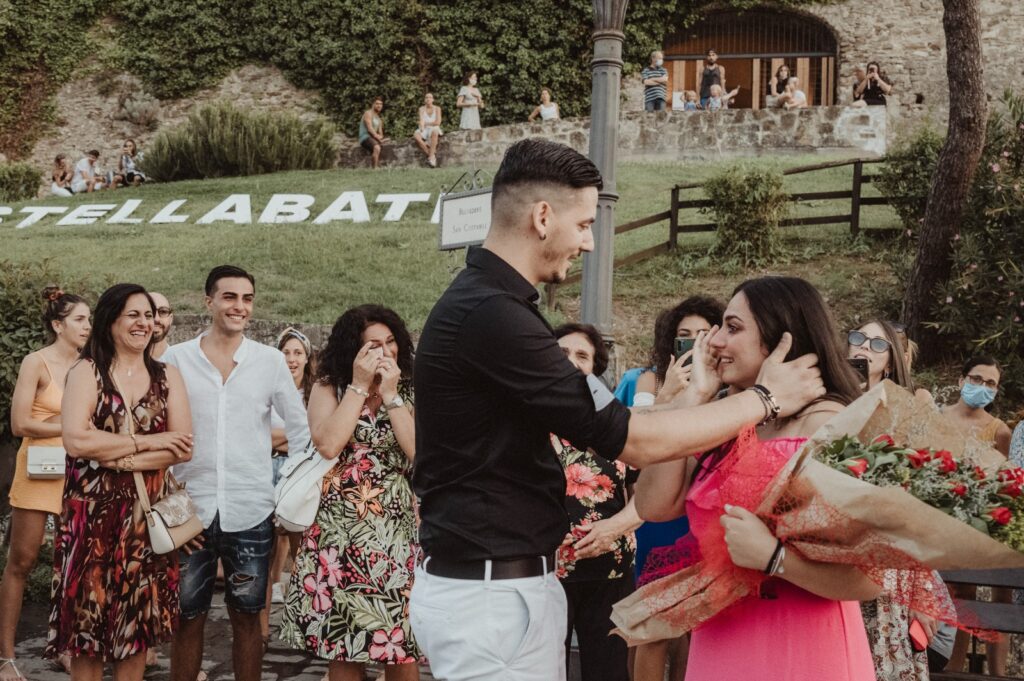 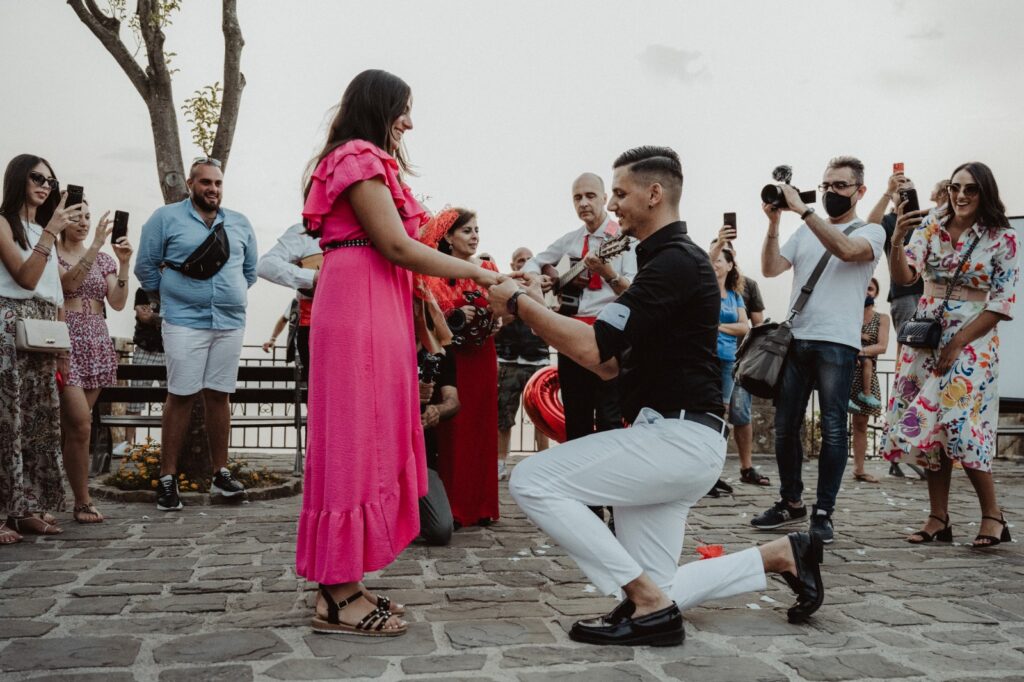 Happiness erupted among applause and the tears of Beatrice when Fabio, who up until then had disguised himself well among the tourists, went up to Beatrice with a bouquet of flowers and then knelt to ask her to marry him. 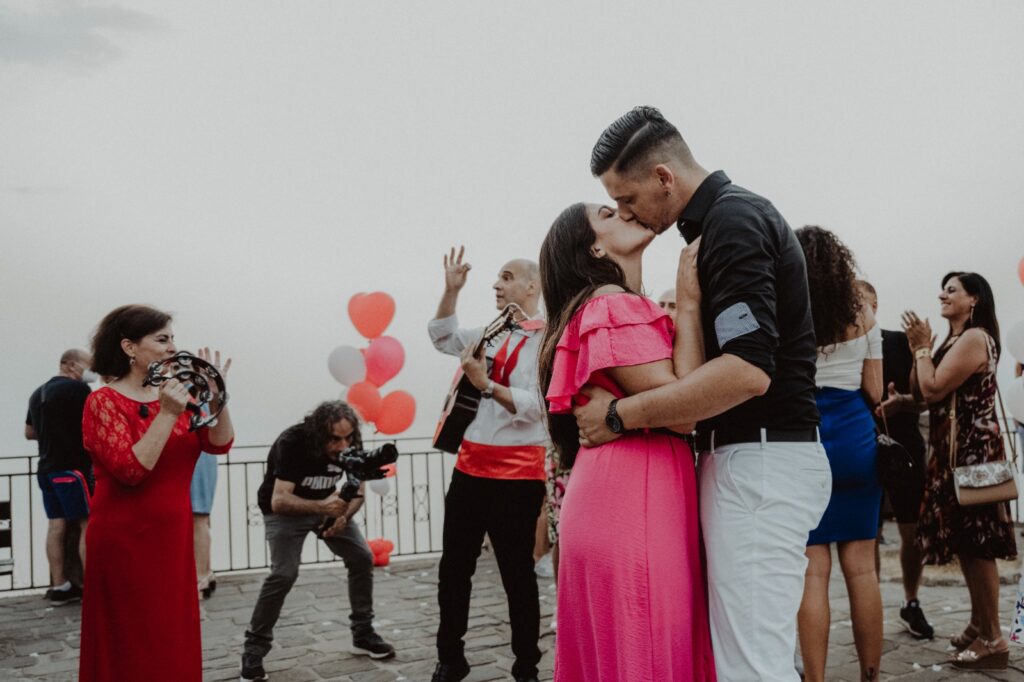 VIDEOMAKER FOR MARRIAGE PROPOSAL IN ITALY

Are you preparing a surprise marriage proposal and you want to save its memory with high-definition footage? I am at your service to give you all the information you need! You can learn more about my style by reading this article in which I talked about the wedding of Giorgia and Pierpaolo!

Are you looking for a wedding videographer? Here is my work method

Videographer for Weddings in Tuscany: the Best Locations

Wedding in Lombardy: what location to choose? 5 ideas

This website uses cookies to improve your experience while you navigate through the website. Out of these, the cookies that are categorized as necessary are stored on your browser as they are essential for the working of basic functionalities of the website. We also use third-party cookies that help us analyze and understand how you use this website. These cookies will be stored in your browser only with your consent. You also have the option to opt-out of these cookies. But opting out of some of these cookies may affect your browsing experience.
Necessary Always Enabled
Necessary cookies are absolutely essential for the website to function properly. This category only includes cookies that ensures basic functionalities and security features of the website. These cookies do not store any personal information.
Non-necessary
Any cookies that may not be particularly necessary for the website to function and is used specifically to collect user personal data via analytics, ads, other embedded contents are termed as non-necessary cookies. It is mandatory to procure user consent prior to running these cookies on your website.
SAVE & ACCEPT
Supporto Assistenza
× WhatsApp